Home Frequently Asked Questions (FAQ) by our Users Is goodwill a fictitious asset?

Is goodwill a fictitious asset?

No, Goodwill is not a fictitious asset.

What is Good Will?

The goodwill of an entity is an intangible asset. It can be said that it’s the excess amount an entity is liable to pay when it purchases all the assets at a price higher than the fair market value of another entity. The purchasing entity is willing to pay the higher amount reasons such as brand image, modernised technology, high-grade employee relationships etc.

The goodwill is valued at the time of the merger of two or more entities or the acquisition of one by another entity.

It is generally noticed that better the organisation’s reputation higher is the value of goodwill.

What is a Fictitious Asset?

Fictitious means “Bogus” or “Untrue” and asset means anything beneficial for the organisation.
Thus fictitious assets are not an asset but just the expenses or losses which can not be accounted for in the current reporting period rather are to be written off in the future reporting period.

Why is goodwill not a fictitious asset?

Goodwill is an intangible asset and not a fictitious asset. A fictitious asset does not have a realizable value as it is merely an expenditure incurred by the company. It does not have a tangible existence either. Whereas goodwill has a monetary value i.e it has a realizable value even though it has no tangible existence.  Hence, it’s an intangible asset.

Goodwill is presented in a balance sheet as; 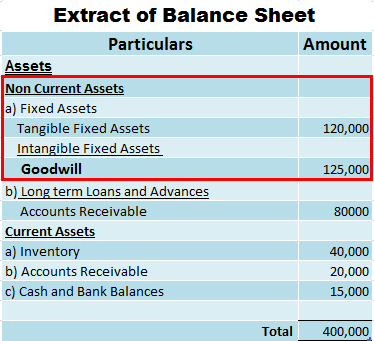